Autoclaves  -  Large vessels that are pressurized and brought to high temperatures.

Bladder Tank  -  A tank that has a rubber bladder inside to be filled with air or water, whichever is approperate.

Boiler  -  A closed vessel in which water or other fluid is heated under pressure for generating steam or other hot fluids.

Expansion Tank  -  Ensures that constant pressure is maintained within the pipes so there is no damage to the pipes.

Heat Exchanger  -  A device used to transer heat from one medium to another at different temperatures.

High-pressure Vessel  -  This vessel is durable, works under heavy loads, and has the best resistance to corrosion.  Usally made of stainless steel.

Solar Tank  -  Stores the heated water from the sun or comercial or residential use.

Surge Tank  -  It is a reserve storage resivoir.

Vacuum Tank  -  Uses high-pressure hoses to clean out liquids and sludges without any damage to the object being cleaned.

Water Pressure Tank  -  Stores the heated water from gas or oil firing for comercial or residential use.

The shell in most vessels is what provides the longitudinal length of the vessel.  Or all vessels, the thickness of the shell is based on the pressure the shell will see (both internal and external), plus any additional loads created by the supports, nozzles or other attachments.  Most shells are circular in shape.  This is based partially on economics of forming the shell but mostly is due to the equal distribution of forces on the circular shape.

Nozzles are inserted into the shell or head and are the first step of what connects to the process piping.  Nozzles can connect to flanges or threaded fittings depending on the design.  Nozzles must be designed depending on the metallurgy of the shell & nozzle, internal and external projections of the nozzle, orientation of the nozzle and  internal and external forces on the nozzle, such as pressure and piping forces.

The saddle is another designed component which carries the weight of the vessel.  A saddle is a plate that supports a pressure vessel and connects to the foundation.  The design of this component takes the physical dimensions of the vessel (weight, length and design) and external forces (Seismic Zones and Wind  Forces, for example).

Pressure vessels usually have internals that are specific to the process.  Click on for more reading on Vessel Internals 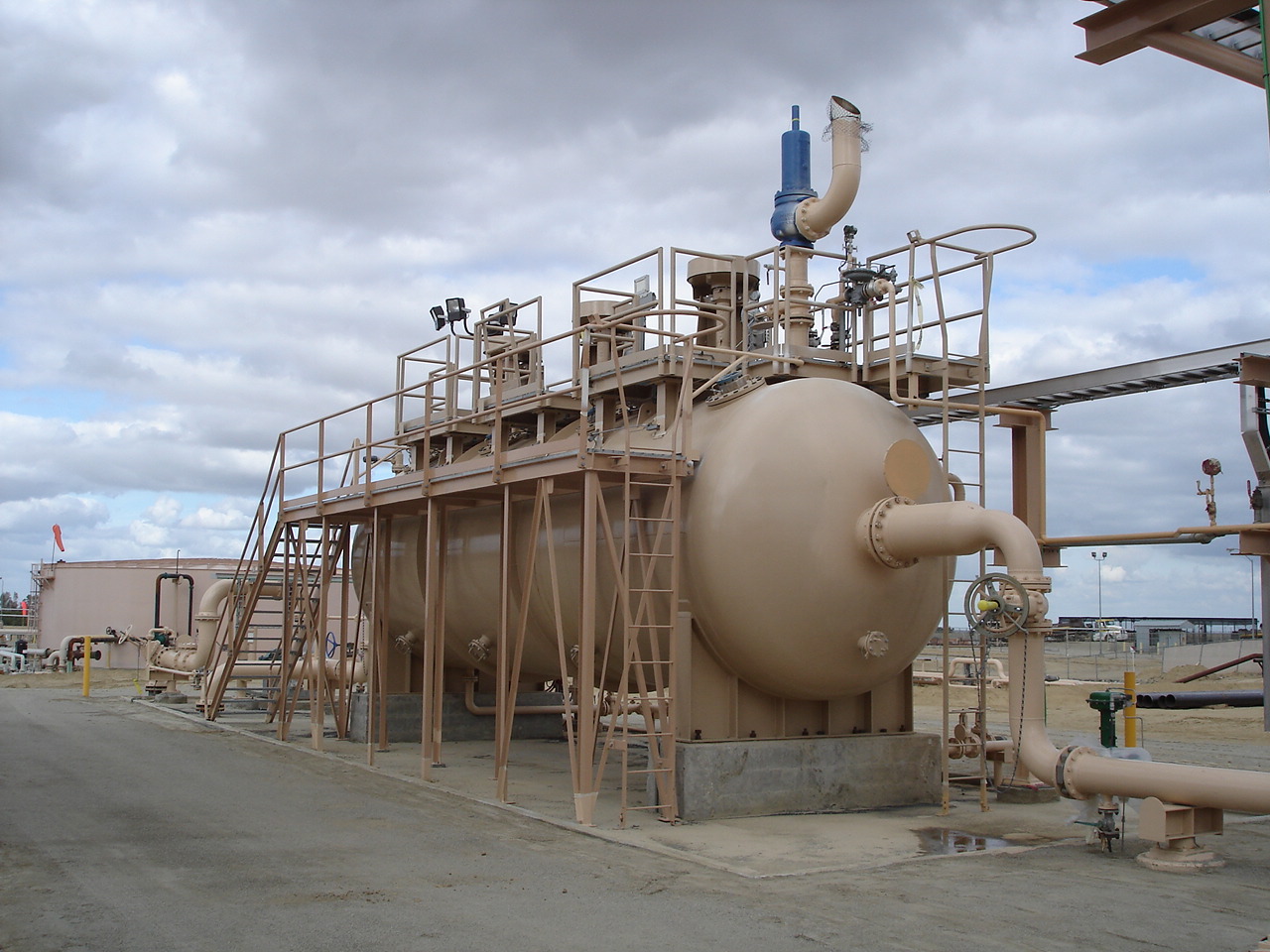 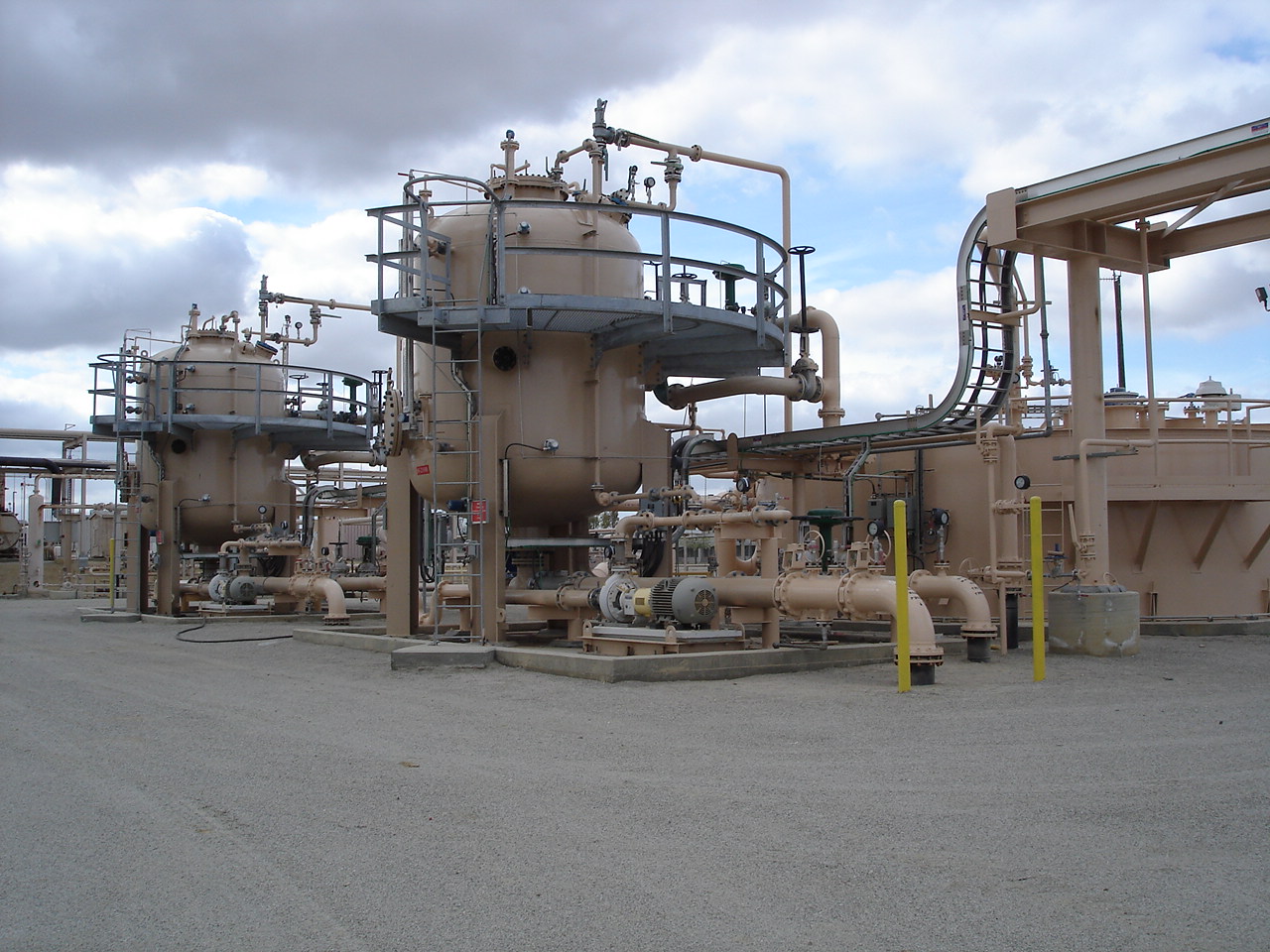 In the upstream oil and gas industry, pressure vessels are used from air accumulators (to help control the frequency an air compressor turns on and off while the system is under heavy load) to three phase separators (which separate oil, water and gas from the production stream).  Some examples of pressure vessels and their usage are shown below.  Each is linked to a page with more information about the individual piece of equipment:

Pressure vessels are designed to operate safely at a specific pressure and temperature, technically referred to as the "Design Pressure" and "Design Temperature".  A vessel that is inadequately designed to handle pressures beyond its maximum allowable working pressure (MAWP) is a very significant safety & environmental hazard.  Because of that, the design and certification of pressure vessels is governed by design codes such as the ASME Boiler and Pressure Vessel Code in North America, Canadian Standards Association (CSA) in Canada, the Pressure Equipment Directive of the European Union (PED) or Japanese Industrial Standard (JIS).